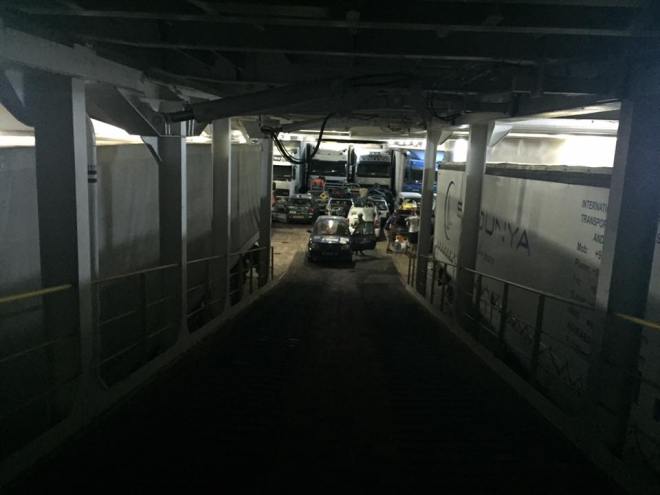 After almost 48hrs on the boat, we unloaded the car at 3pm (a good 3 hours spent waiting in the cargo hold with the car) and spent another 13hrs running around the maze of tiny offices getting stamped, paying various fees, greasing palms, and heavily relying on google translate or acting dumb. The astounding number of stamps I got in various papers at the Turkmenbashi border crossing should, in theory, make me feel endorsed and ratified enough to never feel insecure, ever again, for the rest of my life! 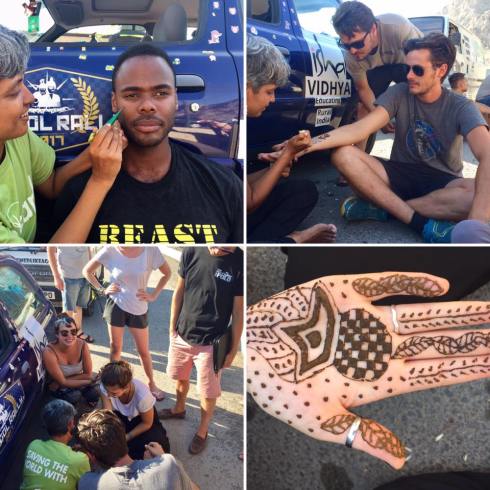 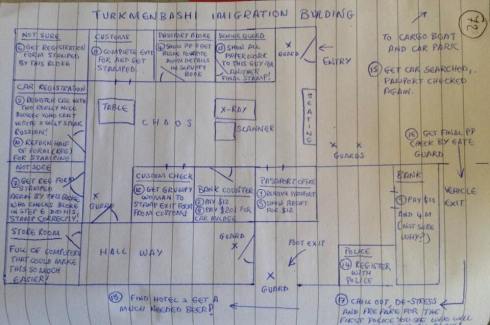 Spent a bunch of time admiring the photos of their president in various poses in every one of the offices: in one he’s in his military dress uniform saluting, another at his impressive desk surrounded by military stuff, writing something, in yet another one he’s carrying two puppies, in another, he’s holding the hands of two kids while people from all walks of life are standing behind him. All the photos made me wonder about photographer – the mix of pride and fear he would’ve felt when he received the assignment, followed immediately by the tedium of obtaining the zillion stamps to secure the job he was conscripted to do.

At around 3:45am, we are finally done with immigration and drove straight to Ashgabat (550kms away). No sleep tonight.

Life, like the Rally, is long hours of waiting, long hours driving, and long hours of general un-noteworthy living, and then running into camels! OMG! CAMELS!!! They are super cute! They also startle very easily! Their wobbly lower lips and doleful make you feel guilty for taking one tiny step (and hence startling them). You want to hug them and leave them alone, both at the same time. Driving through hundreds of miles of beautiful desert (just sand and thorn bushes), with bare mountains off at a distance, and seeing some super cute camels made up for all the hassles at the customs and immigration control the last 13hrs.

After the camel-admiring, we pulled over to go to the toilet in the open, and experience freedom after 4 days of stinky and clogged toilets. I’ve been eating and drinking very little to minimal food and water to avoid going into those closed toilets. As a result I have broken into rashes! (Either that or I’m mixing up correlation with causation between the rashes and not using toilets). Behind the convenient mud bund off the motorway, I discovered I wasn’t the only one with this brilliant idea – many a free spirit seems to have navigated the rocks, thorns and tumble weeds to accomplish their “business” objectives, just like me. With the mid day sun mercilessly beating down, thorns literally in the rear end, the rocks neither too small nor big enough to provide a proper foothold, the fresh breeze still made me rate this toilet a 12/10. After years of being a non-contributing reader, I have avowed to sign up for a Yelp account to mark this place in the global map and give it the glowing review it deserves. Open air toilet FTW!

The purpose of documenting our trip is to keep the unsuspecting readers entertained until we can spring our fundraising appeal on them. Thusly: we need to raise donations yo! We’ve got 3/4 of the way to go with the fundraising and we’re stuck! Please help!!!!